There’s plenty of ZSBC’s distinctive sound on this their fifth studio album, from the barrelling playful ‘Please Don’t Cheat On Me’ and the bustling ‘My Handsome Man’, to the melodramatic Animals-meet-Shirley Bassey blues of the title track, the smoky vibe of ‘Don’t Worry Blues’ and the melancholic plangent Piaf-like torch song ‘You’ve Changed’.

Zoë’s punkier influences show in the snare-driven Stranglersesque paean to Chiselhurst’s 60s music scene ‘Way Down In The Caves’ (based on lyrics by Pete Feenstra’s), and the driving Spencer Davis a-go-go feel of ‘Shout It Out’, while touches of Collins or Schofield appear in the tight uptempo swing of ‘Tell Me’ and ‘Don’t Hold Back’’s steamy blues.

Displaying a more progressive side are the stately organ-led ‘You Don’t Live Here Anymore’, with hints of Procul Harum or Moody Blues, and the intriguing ‘Time Waits For No One’ (the second Feenstra-derived lyric) with its intriguing 7/8 passages and brooding ‘Child In Time’ minimalist pulse. There are splashes of prog too in the middle eight of the ‘Memory Of You’, a quirky Buzzcocks/Pachelbel hybrid with punchy drums and churchy organ.

The band’s stylish sophisticated touch shows in the great unison keys/guitar/bass riff of ‘Shout It Out’, the knowing nod to ‘Can’t Buy Me Love’ in ‘Tell Me’, and the clever double-speed chord sequences opening and closing ‘The Memory Of You’, while there are interesting changes of colour and mood with lush multi-layer harmonies leading out a rocking coda to ‘You Don’t Live Here Any More’ and the switch to an upbeat major poppy theme in ‘Time Waits For No One’, topped with Julie Driscollesque harmony vox.

The production is top notch, an ideal realisation of Ian Gillan’s “everything louder than everything else” comment, so the listener can appreciate all the players equally: Paul Robinson’s fine drumming, tight but loose, responding to the guitar with sudden switches to latiny toms or slick semi-soloing supported by unison riffing; Pete Whittaker’s excellent keys, running from some very nice Nice-style overdriven classical lines to slinky Fender Rhodes; and Rob’s fluid, fusiony skittering runs and squalls, or echt blues phrasing with bags of space. Not forgetting Zoë’s always-impressive vocal, from blues belting on the title track, through the oomph-laden single entendres of ‘Don’t Hold Back’ to gutsy punky growls on Way Down In The Caves’, as well the wholly other-sounding timbre and powerful harmonies of ‘You Don’t Live Here Anymore’.

The strutting latiny groove of ‘Thank You’ with its discursive guitar, meaty organ interjections, a tour of the kit drum workout (and a highly retro key change) rounds of this very polished release from a band really hitting their stride. 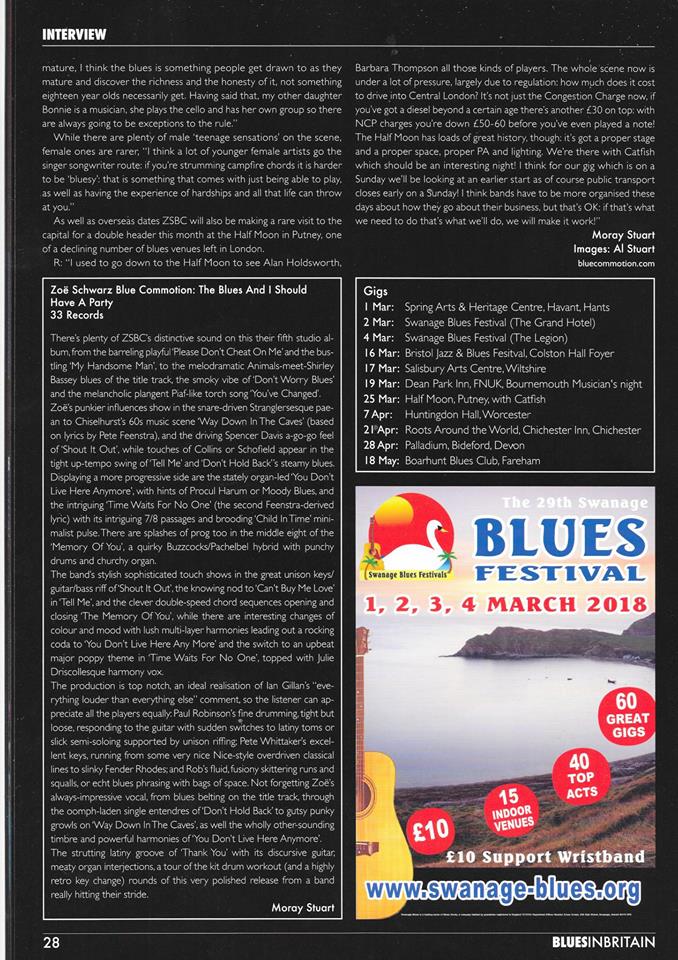